Recently I attended a mass at the most beautiful church in Ravenna, Italy. My husband and I were in Ravenna on that particular Sunday morning when beautiful church bells began ringing in the distance. Although we are not Catholic, finding no Protestant churches in the vicinity, we finally decided that we would attend. This cathedral, Basilica of San Vitale, is one of the most important examples of early Christian Byzantine Art and a UNESCO World Heritage site. We wanted so much to see the mosaics and the interior of this beautiful cathedral. Drawn by the melodious bells we quickly scurried into the cathedral and promptly took a seat in a small block of wooden pews near the front of the altar. The cathedral was magnificent with mosaics covering high vaulted ceilings and every wall within the building. The mosaics were bold and vivid in color even though they dated back to the 5th century. Visions of angels and saints danced along the walls, and in the center of the highest part of the wall was the face of Christ. A processional arrived with a Priest carrying a magnificent golden cross at the front while a few others paraded behind him singing as they approached the altar. From a balcony above, beautiful music and singing filtered through the cathedral resonating about the vaulted ceilings. It was truly beautiful to behold! The entire mass was in Italian and was written in a program for each congregate. Since I speak French I was able to decipher much of what was being stated. In the message there was much reference to Spirito Santo, the Holy Spirit, and Gesu Cristo, Jesus Christ. 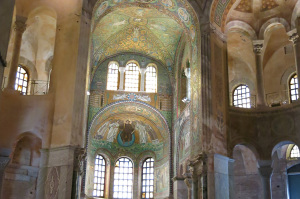 During the service I found myself looking about at the small intimate congregation seated in the old wooden pews, while continuously praying for each one of them. Very few in number and mostly elderly, they sat attentively and repeated obediently according to the program. Then suddenly it hit me, there was such a heaviness about the room. The majority of the people were neither smiling nor rejoicing during the entire service. Although everything appeared so holy and lovely to behold, where was the joy that comes from entering the presence of a holy omnipotent God? Was much of what was being stated just an exercise in repetition and rote? In fact, how often do we as believers, regardless of our church affiliation, make rote statements and declarations about our relationship with Christ the Father? Do we truly know the Christ to whom we speak? Doesn’t He say in John 10:27, “My sheep hear my voice, and I know them, and they follow me” ? Do we recognize His voice? Do we truly follow Him? Or do we ritually complete the daily devotionals, which have become so popular and then call it a day? Do we truly have a revelation of who Christ is and who He has called us to be? Imagine, if congregates in all the churches had a true revelation of Christ and the authority that they have through Him. Then the nations would be completely transformed by His power. Freedom would reign and the fullness of joy would be evident in everyone. 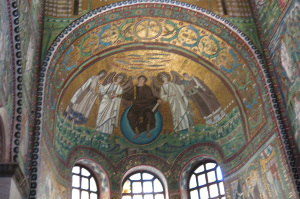 As Christians we sometimes set ourselves above people of other faiths who do not believe as we do. We have a tendency to criticize others for their beliefs and to mock their rituals and behaviors. In fact, we often intentionally avoid others who are different from us and segregate ourselves in familiar groups with beliefs likening our own. Sadly, almost 90% of Christians minster only to other Christians and usually those are within their own groups. Jesus, on the contrary, met with all kinds of people of all kinds of faiths. We are called to love one another. Giving others grace and mercy for believing the way they do, even if we do not agree with them, is a way of showing love to them. Avoidance limits our opportunity to share the truth of Christ, which leads to transformation.

When we accept Christ we are given a marvelous gift of His Spirit to open our eyes to the wonders of an omnipotent God. We have been given an incredible opportunity to make a difference for ourselves and for others for eternity. And yet, in our selfishness we limit ourselves, and in effect others, in our failure to love people and to know intimately our Lord and Savior. Charles Spurgeon ( 1834 – 1892) a British Baptist preacher, still known as the “Prince of Preachers”, stated that “The door of the Word only opens to the key of diligence.” We essentially need to pour our lives into submission to the Word of God. We need to hear His voice daily and intimately and to love people in spite of their differing beliefs. We need to continually grow in our prayer life, in listening to His voice, and in the manifestation of His gifts within us and through us. This type of shift will by no means happen in the natural realm. As selfish and indulgent creatures we are helpless to achieve this goal independently. However, by His grace, by His strength, by His divine intervention, we can offer ourselves up wholly unto Him, allowing Him to make a paradigm shift within us; thus, leading us to heights beyond our reasoning, to His realm and to His Kingdom glory!

Want to join the discussion?
Feel free to contribute!

My Thoughts on Perspective

Resolving to Sow Mercy and Grace
Scroll to top