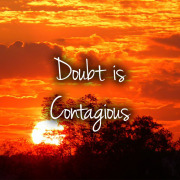 Doubt is contagious and requires no faith or effort on our part to obtain or contain it. It’s always easier not to trust God than it is to trust Him. Since doubters are so prevalent, doubting always seems to come in an easy to unwrap package. In our efforts to satisfy our need for self-protection, doubt encourages us to lower our expectations. Not wanting to fail or to be hurt, we lower our expectations to prevent disappointment. With lowered expectations our circumstances become somewhat easier to accept when things don’t work out the way we had hoped or imagined.

Frequently doubt enters the door through the people around us who are quick to point out the obstacles and hindrances to our situation. The Bible states, “…you have been trapped by what you said, ensnared by the words of your mouth.” (Pr 6:2) Doubt is carried on the wings of words. The words you speak or listen to will either lift you up or tear you down, either increase your faith or decrease it. The Bible also states, “Faith comes by hearing, and hearing by the word of God” (Ro 10:17). If we don’t keep our mind filled with God’s Word we’ll be constantly assailed by doubt. Words are powerful!

Doubt corrupts God’s word and leaves us wavering and vulnerable.

Faith does not ignore the facts, it ignores the power of the facts. 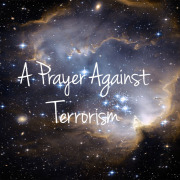 Today we are joining your people worldwide in praying against terrorism in every form that it exists across the face of the earth.  We begin our prayer to You with the strong words of Psalm 10:17 “You hear, O Lord, the desire of the afflicted; you encourage them, and you listen to their cry, defending the fatherless and the oppressed, in order that man, who is of the earth, may terrify no more.”  (NIV)  We use this strong promise to pray against all terrorists and all acts of terror meant to strike fear into our hearts.

We pray today that your people will not be shaken.  We declare your word in Psalm 16:8  “I have set the Lord always before me.  Because he is at my right hand, I will not be shaken.”  (NIV)  And so we shall not be shaken from offering this bold prayer to you against terrorism and for continuing to seek healing, hope and security for all people.

We pray for your divine protection, claiming your word in Psalm 7:9 “O righteous God who searches minds and hearts, bring to an end the violence of the wicked and make the righteous secure.”  (NIV)

We pray for those who have been directly affected by terror.  We claim Psalm 9:9 for them, “The Lord is a refuge for the oppressed, a stronghold in times of trouble.”  (NIV)  We thank you that the victims of terrorism are in your heart, that you care as it says in Psalm 10:14  “But you, O God, do see trouble and grief; you consider it to take it in hand.  The victim commits himself to you;” (NIV)

We pray for law enforcement and military around the world who protect your people from acts of terrorism and who are on the front lines of security.  May your angels empower them with supernatural wisdom and discernment and may your angels protect them as they protect us.

We pray a fresh empowering of your Holy Spirit upon us as we offer this prayer.  May we continue to pray with faith, “Thy kingdom come, thy will be done on earth as it is in heaven.  Lead us not into temptation, but deliver us from evil.”  (Matthew 6:10,13)

Empowered by your Holy Spirit, we declare against this terror, “Even though I walk through the valley of the shadow of death, I will fear no evil, for you are with me; your rod and your staff, they comfort me.  You prepare a table before me in the presence of my enemies.  You anoint my head with oil; my cup overflows.  Surely goodness and love will follow me all the days of my life, and I will dwell in the house of the Lord forever.”  (Psalm 23:4-6)

We now break the power of fear and invite the Holy Spirit’s power of strength, help, willpower and miraculous wonder working power to have full reign in our hearts and minds and in our hurting, terrified world.

We pray in the name of Jesus, the Risen Lord. 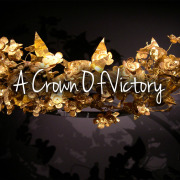 In August 2008, Greek archaeologists discovered a priceless gold wreath dated about the time of Alexander the Great, fourth century BC. The crown of golden oak leaves was included along with human bones inside a golden cylinder, which itself was secured within a large copper vessel.

There are two types of crowns mentioned in the New Testament. One crown is a rulers crown a Diadema, the other is a victors crown known in the Greek as stevfano …Stephanos …meaning victors crown. In ancient days this crown was given to victors as symbols of success in military conflict and in athletic contests. Often the crown was constructed from the leaves of oak or pine trees.

In Revelation 4:4 mentioned above, the type of crown the 24 elders have is a “Stephanos”crown. Since the elders are sitting on thrones they are clearly in positions of authority. Soon each elder throws down his crown (Stephanos) before the One on the throne, symbolizing their dependence on Christ for their victory. Christ promised his saints positions of authority over his coming kingdom. “Jesus said to them, “Truly I tell you, at the renewal of all things, when the Son of Man sits on his glorious throne, you who have followed me will also sit on twelve thrones, judging the twelve tribes of Israel. Matthew 19:28.

At the close of his life, the Apostle Paul describes what he had accomplished by God’s grace: “I have fought the good fight, I have finished the race, I have kept the faith.” He confidently adds, “Now there is in store for me the crown of righteousness, which the Lord, the righteous Judge, will award to me on that day-and not only to me, but also to all who have longed for his appearing”. (2 Tim. 4:7-8). This crown of victory is also termed Stephanos. In Revelation, Jesus urges us, “Be faithful, even to the point of death, and I will give you the crown of life”, a victor’s crown, Stephanos(Rev. 2:10).

I was reflecting this morning about two dear friends who have endured great pain and suffering throughout the last few years. I must admit I stand in total awe of the model of tenacity and perseverance they have continually demonstrated throughout their situation. I have watched them reach out to others and minister in the church while under the most trying of circumstances. I have also noticed how they have continued to spend themselves for the benefit of others, in spite of their own suffering; never making any excuses, just walking in continual obedience to God’s call. Recently, I was reminded of a past discussion with my friend where she was refusing to allow herself to be bound and ruled by her circumstances. She fought continuously to free her mind to the things of God, always focusing on His Word, His will, and His purposes, while striving to walk in His authority.

In my mind, I believe this beloved couple has already received the Stephanos, the victor’s crown, and that it is awaiting both of them.

Many of you may be experiencing some extremely difficult situations or setbacks in your lives at this very moment. However, I know in my heart that the Lord would have you be encouraged that “in all these things you are more than conquerors” when you stand in His authority.

We don’t fight for Victory! We fight from Victory!

With Jesus as our focal point, in spite of hardships and numerous trials, and because of Christ’s continual faithfulness we win a Stephanos… A crown of victory…Victory over oppression, victory over our circumstances, victory over darkness , victory over this world ! 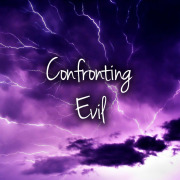 As never before, the risk of terrorism is now real for each one of us in America and across the world. Fear is a powerful emotion with deep roots. In those difficult moments in our lives when there are no answers, or when unexpected change occurs, it is important that we fight the desire to live by our feelings, but instead, that we move forward to confront our fears, to meet them head on. It was a great revelation to me when I realized that I couldn’t control the feeling of fear but I could keep it from controlling me. The word fear means “to run or to take flight.” So when we give in to fear, we always run away from something that we should be confronting. God wanted the Israelites to go forward into the unknown. He wanted them to be so fed up with bondage, that they would be willing to risk drowning in the Red Sea rather than going back to slavery. God wanted them to be bold and courageous…and He wants us to be bold and courageous too!

As we delve into the New Testament, we see how Christ confronted evil. He met it head on…Jesus said, “”But my righteous one will live by faith. And I take no pleasure in the one who shrinks back.”
We make a serious mistake when we shrink back or turn our back on evil, and here is why:

•When we believe that evil does not exist, ignore it, or cower from it, we become oblivious and vulnerable to it.
•When evil is dismissed as unreal or insignificant, good becomes irrelevant.
•Good is only understood in relation to evil.
•If nothing is evil, then nothing is good.

Since most of us are not in position to physically confront evils,
let us go forth in an even more powerful way…by confronting it with daily, fervent, Radical Prayer:

1) Praise God that He is sovereign, that He has ultimate control over all, and that nothing takes Him by surprise (Isaiah 45:5-7).
2) Ask God to break our hearts for His people, for the people of all nations, that we may be committed to intercede and pray daily on their behalf.
3) Ask God for a passion and love for Christ that DRIVES OUT FEAR.
(1 John 4:18).
4) As believers, let us boldly take authority through Christ to tear down the strongholds of evil and brutality that drive terrorism; may God destroy the darkness that permeates groups like ISIS, Al Shabab, Al Qaeda, and Boko Haram.
5) Ask God to bring unprecedented SPIRITUAL OPENNESS to people—a hunger for God and His truth in the midst of these terrorizing events. Thank God that he will use for GOOD, what Satan intended for harm. (Gen. 50:20-21)
6) Ask God to bless the ministry that has been thrust upon the church to help those affected by the terrorist attacks and the war.
7) Ask God to focus the minds of public officials and the military on the need for prayer in dealing with the challenging difficulties and decisions before them.
8) Ask God to stand against Satans attempts to make people experience unresolved anger or guilt over the loss of loved ones and friends, or a desire to seek revenge. Justice will be served, if not in this life, then in judgment for those who are not covered by the grace of God through Jesus.
9) Pray that those Arabs and Muslims who are innocent of these attacks will not be blamed or physically harmed.
10) Pray for the return of peace, both in America and throughout all the nations.
11) Thank God for the people who will be DRAWN TO SEEK GOD’S FACE because the overwhelming nature of these events leaves them nowhere else to turn.

Our greatest weapon against fear is the sword of God’s Word through Prayer….Our response to evil should always be to confront it!