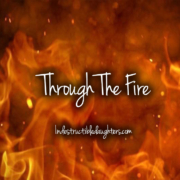 I wrote this a while back and posted it but it still seems so timely during this season. It ministers to me and and I hope to you…..”

Heidi Baker, a missionary from Mozambique did a teaching on Psalm 84 while Bruce and I were visiting in Southern California a few years back. She had been “through” numerous trials and much suffering on the mission field. Many times she and her husband had almost been killed. She shared how God had helped them “through” these hardships. Their path was long and difficult and still they stood before us sharing their lives in strength and joy. Psalm 84:5-7 states: “As they pass “through” the Valley of Baca [brokenness, loss, grief, and weeping] they make it a spring…they go from strength to strength”.

I love the hope and power instilled in those words… “from strength to strength.”No matter how tragic the circumstances, when my father died, my mother died, when my baby girl died, when I was frightened, alone, and penniless as a young woman, God met my needs. He carried me and He will carry you…”through” it all. When we embrace him and yield ourselves in absolute surrender to Him, He, in His mercy and grace takes us from strength to strength.

Be strengthened. Rejoice! There’s abounding hope in the word “through”. 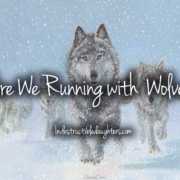 As our culture becomes more polarized, we are seeing more anger, division, and war rhetoric rise up in believers than ever before. Clearly, I don’t doubt that we are in a war, but we must remember who we are fighting. This is a spiritual war. The question we must ask is this: Is a warlike posture the proper response to an increasingly anti-Christian society? Is this how we will win them to Christ? Joining and running with the pack? Does such an approach represent the “wisdom that comes down from above,” or the wisdom that is “earthly, unspiritual, [and] demonic” (James 3:13–18)?

“Who is wise and understanding among you? Let them show it by their good life, by deeds done in the humility that comes from wisdom. 14 But if you harbor bitter envy and selfish ambition in your hearts, do not boast about it or deny the truth. 15 Such “wisdom” does not come down from heaven but is earthly, unspiritual, demonic. 16 For where you have envy and selfish ambition, there you find disorder and every evil practice.

17 But the wisdom that comes from heaven is first of all pure; then peace-loving, considerate, submissive, full of mercy and good fruit, impartial and sincere. 18 Peacemakers who sow in peace reap a harvest of righteousness.”(James 3:13–18)

Our proper response is, as Jesus himself put it, “If my kingdom were of this world, my servants would have been fighting. . . . But my kingdom is not from the world” (John 18:36). “For we do not wrestle against flesh and blood, but against the rulers, against the authorities, against the cosmic powers over this present darkness, against the spiritual forces of evil in the heavenly places” (Eph. 6:12).

When Jesus was being arrested and, Peter, in his pitiful attempt to intercede, cut off the ear of a guard with his sword, Jesus told him to put down the sword.

Peter and the disciples must have been incredibly shocked by Jesus’ response. It was indeed countercultural.

And while Jesus was on trial and eventually being crucified…Note His response:

*We don’t see Jesus spewing in anger, resorting to name-calling and mockery.

*We don’t see him imitating outrage culture or giving in so easily to the pack.

*We don’t see Jesus fighting and quarreling with his opponents—forgetting that such skirmishes stem from selfish motives (James. 4:1),

*We don’t see Jesus mocking those in opposition, using the popular rhetoric of sarcastic memes, name-calling, and condescending language.

*We don’t see Jesus in their likeness RUNNING WITH THE WOLVES.

“But shouldn’t we oppose the evils being spread in our society?”

A recent article in the Gospel Coalition answered this question so very well:

“The answer is a resounding YES. Engaging with—and even confronting—our culture is a legitimate form of being salt and light in the world.

Again, the deciding factor is the NATURE of our engagement. Are we seeking to destroy or to rescue our opponents? When we correct or oppose or reprove, is it with the goal of winning the conversation or winning a neighbor? Do we confront others in the right spirit? To engage with our culture in a militant and hostile manner is to forsake our role as ambassadors. It’s trading our diplomatic visas for military dog tags. It’s trading the armor of God for the fig leaves of human striving. It’s a capitulation to earthly wisdom—attempting to fight for the kingdom of God on the world’s terms.Too often, when push comes, shove follows. Too often, when the culture opposes us, we feel like equal opposition is the only answer. But the second greatest commandment reminds us that we are to love our neighbors as ourselves. And the parable of the Good Samaritan reminds us that our neighbor is any person we come into contact with—including those who insult and threaten us.

By divine decree, everyone is our neighbor. No exceptions. And we win our neighbors through the same love that won us.”