How To Treat Refugees?

Immigration continues to be one of the most politically polarizing issues in America. The topic of immigration policy has been a staple of recent presidential debates, and has even divided some members of the Church.

After recent terrorist attacks, new debates have arisen about how America and other wealthy nations should accept refugees from the war-ravaged nation of Syria.

The issue of immigration reform is nuanced, and policies are often legislatively complex. But the wisdom of the Bible is both simple and timeless.

Here are 12 passages that discuss how Christians should treat immigrants, refugees and those in need of help.

Love Refugees As Yourself

Leave Food for the Poor and the Foreigner

When you reap the harvest of your land, do not reap to the very edges of your field or gather the gleanings of your harvest. Do not go over your vineyard a second time or pick up the grapes that have fallen. Leave them for the poor and the foreigner. (Leviticus 19:9-10)

God Loves the Foreigner Residing Among You

He defends the cause of the fatherless and the widow, and loves the foreigner residing among you, giving them food and clothing. And you are to love those who are foreigners, for you yourselves were foreigners in Egypt. (Deuteronomy 10:18-19)

The Sin of Sodom: They Did Not Help the Poor and Needy

Now this was the sin of your sister Sodom: She and her daughters were arrogant, overfed and unconcerned; they did not help the poor and needy. (Ezekiel 16:49)

Do Not Oppress a Foreigner

Do not oppress a foreigner; you yourselves know how it feels to be foreigners, because you were foreigners in Egypt. (Exodus 23:9)

Do Not Deprive Foreigners Among You of Justice

“So I will come to put you on trial. I will be quick to testify against sorcerers, adulterers and perjurers, against those who defraud laborers of their wages, who oppress the widows and the fatherless, and deprive the foreigners among you of justice, but do not fear me,” says the Lord Almighty. (Malachi 3:5)

Do Whatever the Foreigner Asks of You

“As for the foreigner who does not belong to your people Israel but has come from a distant land because of your name— for they will hear of your great name and your mighty hand and your outstretched arm—when they come and pray toward this temple, then hear from heaven, your dwelling place. Do whatever the foreigner asks of you, so that all the peoples of the earth may know your name and fear you, as do your own people Israel, and may know that this house I have built bears your Name. (1 Kings 8:41-44)

Leave Your Door Open to the Traveler

No stranger had to spend the night in the street, for my door was always open to the traveler (Job, discussing his devotion to God) (Job 31:32)

Invite the Stranger In

We Were All Baptized By One Spirit

Just as a body, though one, has many parts, but all its many parts form one body, so it is with Christ. For we were all baptized by one Spirit so as to form one body—whether Jews or Gentiles, slave or free—and we were all given the one Spirit to drink. Even so the body is not made up of one part but of many. (1 Corinthians 12:12-14)

Love Your Neighbor as Yourself

For the entire law is fulfilled in keeping this one command: “Love your neighbor as yourself.” (Galatians 5:14)

Have Mercy on Your Neighbor

He asked Jesus, “And who is my neighbor?”

In reply Jesus said: “A man was going down from Jerusalem to Jericho, when he was attacked by robbers. They stripped him of his clothes, beat him and went away, leaving him half dead. A priest happened to be going down the same road, and when he saw the man, he passed by on the other side. So too, a Levite, when he came to the place and saw him, passed by on the other side. But a Samaritan, as he traveled, came where the man was; and when he saw him, he took pity on him. He went to him and bandaged his wounds, pouring on oil and wine. Then he put the man on his own donkey, brought him to an inn and took care of him. The next day he took out two denarii and gave them to the innkeeper. ‘Look after him,’ he said, ‘and when I return, I will reimburse you for any extra expense you may have.’

“Which of these three do you think was a neighbor to the man who fell into the hands of robbers?”

The expert in the law replied, “The one who had mercy on him.” 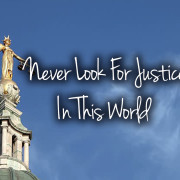 “Never look for justice in this world, but never cease to give it.” Looking for justice is actually a sign that we have been diverted from single-minded devotion to God. If we look for justice, we will only begin to complain and to indulge ourselves in discontent and self-pity, as if to say, “Why should I be treated like this?” “ Why are others treated like this?” If we are devoted to God, we understand that we are directed to treat others justly, but He alone justifies. This is one of God’s boundary markers for us. When we attempt to rescue others, or ourselves, we have taken on His battle to justify. Psalm 91:11 states; “For He will command His angels concerning you to guard you in all your ways.” If we try to guard ourselves, we put our common sense on the throne and then attach God’s name to it. Instead of “not” leaning on our own understanding (Proverbs 3:5-6), we “do” lean to our own understanding and, therefore, we are not trusting God. He is “the guard” and only He can justify. Although we are to war through prayer for others and ourselves, not our arm, but His “arm will bring justice to the nations.” (Isaiah 51:5)

Father, please forgive us for crossing Your boundaries for us. Lord may we surrender outcomes and results to You alone. May we focus on “doing” your will and on leaving the outcomes to You. May we not be diverted by thoughts of justice and injustice, fair and unfair. You alone will justify. May we fix our eyes on You. May we walk in obedience by “doing” all that You direct us to do. May the outcomes rest with You. For your glory and in your name we pray…Amen

(a few key lines taken from writings by Oswald Chambers)