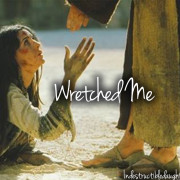 Today in prayer, I asked Jesus to help me with something I’ve been struggling to get beyond for quite a while. It was one of those heartfelt moments when I lay before Him groaning, “ugh, wretched me.” During those times when I truly seek Him, after prayer I come away feeling a peace and assurance that He will indeed meet my need in His way and in His time.  But this afternoon as I was reading the Bible, I thought what if Jesus were to have rebuked or rejected me the way the story of the Canaanite woman begins in Matthew 15:21-28. What would I have done? This brave woman has got to be one of the most composed and tenacious figures Jesus encounters. To be told by the Lord that you’re no better than a dog, how could you withstand it? Any person of ordinary bearing would crumble at such rejection. But not she.

There is no apparent reason for such composure. She isn’t rich, educated, or highborn. Like others who seek Jesus, she is in need. “Have mercy on me, O Lord, Son of David,” she pleads; “my daughter is severely possessed by a demon.” Her plea puts her in a long train of faithful, agonizing people who are seeking restoration through Jesus. However, there is more to her than wretchedness and faith… there is more force, more impetus:

This desperate woman is a Gentile, from a tribe historically hostile to the region. And yet, she cries out boldly, maybe a little imposing, a little pushy, with none of the meekness of other seekers.  You might imagine her nudging people, pushing them aside, while butting in line to reach Jesus. Her driving spirit suggests her ability to recognize Him across the social divide. She’s desperate, of course, with a daughter at home in the clenches of evil, but her bold address, “O Lord, Son of David,” is also the declaration of a new awakening for the nations.This brazen woman pressures Jesus to act. However, Jesus doesn’t reply, “But he did not answer her a word.”

It sounds like a tense interlude, one of those scenes everyone eventually undergoes, the kind you remember for a long time with a shiver. You were vulnerable and sensitive for some reason one day, a person insulted or mocked you and shame flooded over you. However, in this story in Matthew 15, it’s the King of Kings shunning a distressed foreign woman. What a shock! We might readily expect the poor woman to slink away mortified. Nevertheless, she turns from Jesus and without pause begins pressuring the disciples for help. The disciples rebuke her, but she still isn’t put off. As ordinary types, we are rarely ‘that’ persistent. “Send her away,” the disciples beg Jesus, “for she is crying after us.” They can’t rid themselves of her. Just imagine her tugging at their cloaks and pleading for help as they chide, “Run along, foolish woman.” This time Jesus answers, not her but them, making clear the limits of his mission: “I was sent only to the lost sheep of Israel.” A rejection once again—no Canaanites allowed. If his intention is to muffle her, it works. Her demeanor changes; she moves from persistent to meek. But with it comes another sweet irony. Her humility makes her more undeniable than in her previous efforts. Kneeling before him she utters the most basic appeal of all: “Lord, help me.”

This Jesus cannot deny. Her ego is gone, not a shred of it remains. In a single plea for help, she symbolizes the whole of suffering humanity. She represents every person who has a suffering child, whom the world has rejected, while trusting in authority that has proved deaf and without care. She is universal. She is not simply Canaanite, female or male, young or old, blond or brunette. Her authentic plea overrides the limitation Jesus has just declared, the exclusion of all but Israel. He must, he absolutely must, we think, grant her request. Instead, Jesus utters what seems the most callous statement of all: “It is not right to take the children’s bread and throw it to the dogs.”

At this point, we register shock at the cruelty of that remark. How will she respond? She has bowed and lowered herself to the dirt, but if we assume she has lost her strength and wit, we forget a basic Christian paradox: the “power made perfect in weakness,” as Paul puts it in 2 Corinthians 12:9. The lower she falls, the easier it is to endure judgment: “For when I am weak, then I am strong” (12:10). When you concede to your wretched condition, the word dog in the Lord’s mouth doesn’t rattle or dismantle you. You’re not looking for evidence that you are not a dog, but only seeking mercy, even as a scavenging animal. Her comeback is solid. “She said, ‘Yes, Lord, yet even the dogs eat the crumbs that fall from their masters’ table.’”! Of course, Jesus is not forgetting himself nor does He need a reminder of his mission.He knows well the parable of the dog and the crumbs. It is, instead, a ready opportunity for the Canaanite woman to hollow out her pride.

Her example is a lesson for us, particularly during those times of confession, when we feel ourselves as dirty rags before Him, and yet, we still cling to bits of pride. This suffering Canaanite woman empties herself of ego and lays herself prostrate. She is humble but without humiliation, because she is before Jesus. She dares to edit His statement about the dogs because she trusts in His boundless mercy. Her petition is the kind that only those with no insecurities to defend are able to make because they have surrendered their sins to Jesus confident in what He will do.  Kneeling before Him, she is solemn “Yes, Lord, yet even the dogs . . .”.

Jesus’s final decision: “O woman, great is your faith! Let it be done for you as you desire.”

Many of us begin where the Canaanite woman does, with fumbling words and vain hopes even in our repentance and prayers. The French have an expression, l’esprit d’escalier (“the wit of the staircase”). It refers to an individual at a dinner party who blunders in conversation and exits in embarrassment. After he leaves, a few brilliant, but all too late comebacks, pop into his head. He wanted the others to judge him witty and bold, but he was too self-conscious to do it well.

God saves us from this foolish pride. When we confess, we don’t ask Him for anything—only undeserved help. When we see ourselves in His eyes, just about everything about us is shameful, which means that if we are sincerely repentant, we need not be at all ashamed in his presence. We aren’t trying to flee or conceal our sin. We are acknowledging it fully before Him. In total obedience to him, there is no more trying to bear our pride. This is the gift of confession in Christ. For a brief and remarkable time, the struggle of self-sufficiency stops, the schemes of ego cease, and we are free to absorb whatever God deems us, whatever it may be… rebuke, judgment, forgiveness, His love, His mercy…we open ourselves to Him. There is freedom and healing there…in Him. 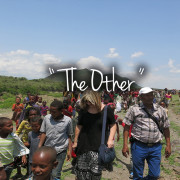 Do you see “the others”? Sight and insight (discernment) are valuable gifts of the Holy Spirit. If we had been able to genuinely “see the other” is it a possibility that the refugee crisis, the destruction of Syria, and terrorists groups like ISIS, Al Shabaab and Boko Haram might never have been? If we were able “to see the other” might the chaotic civil strife taking place in our own country, the ignorance and apathy concerning orphans and abused children, the ethnic cleansing in the Sudan, worldwide trafficking,– might all of this have been avoided – if only we could see? What prevents us from seeing the “other” person wittingly or unwittingly? Are we practicing a system of exclusion or oppression rather than one of embrace?

Might it be the young people whose music is so loud, whose language is incomprehensible, whose body-piercing and head shaving is so alien – have we ever stopped to look at them, to consider them– the broken homes, the bleak prospect of unemployment, an uncertain future – have we ever stopped long enough to look at them as God’s children and try to understand them in that context? Might it be those immigrants and refugees who do not know our language, having different faiths and skin colors, who are moving into our country and the suburbs of our cities – have we ever had them in our homes, offered them hospitality and tried to genuinely “see” their culture. Are we so bound in fear, in apathy, in ignorance, in exclusion and separatism? Is a weapon always to be our ready response rather than an arm of embrace and welcome?

Spiritual sight encourages Christians to acknowledge the identity of the “other” – the “other” who is full of potential that can be realized in relationship with Christ. As for me, it is in encountering “others”, not of my culture, my faith and the broken and the lost, where I am often confronted with the truth of myself and all that I am capable of becoming. When I embrace the “other”, in a small way I begin to die to myself and begin to see myself in the “other”. There is a linking there. We are all God’s children made in His image and in His sight. This is not a cliche, it is truth.

John V. Taylor comments, “But no less necessary to the Christian mission is the opening of our eyes towards other people. The scales fell from the eyes of the convert in Damascus precisely when he heard one of those whose very lives he had been threatening say, ‘Saul, my brother, the Lord Jesus has sent me to you.’”

The gift of sight truly enables us to see the “other” person, to share our common humanity and to establish relationship. The gift of sight embraces the “other”, and acknowledges and welcomes the potential in the “other”. Mother Theresa saw this in her selfless giving and serving of the poor and the sick and the “unclean” lepers of Calcutta. She knew that Jesus had sent her to them and she saw the potential in the “other”. God allowed me to see the “other” in the hopeless faces of starving children and despairing refugee moms as I journeyed through the Middle East, Europe and Africa. It is never too late with God. The battle is not lost no matter what the media or your friends might say. He is the God of hope and the God of miracles. He is not a sensational headline. He is a sensational, miraculous God with a global vision for all His children. He is just waiting on us to “see” Him and to “see others”. Genuine sight (discernment) embraces the “other” and will inevitably lead to human flourishing not only for the “other” but within the deepest part of who we are called to be.

May God lavish each of you this day with His wondrous sight. Pray for it my friends.
Blessings,
Karen