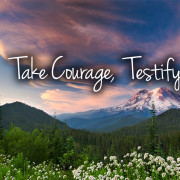 “Does my example as a believer wean people away from love of the world, or does it increase their attachment to it?”
In 2 Timothy 4:10 we read:“For Demas, who has fallen in love with this present world, has deserted me/left me in a lurch/forsaken me/abandoned me and gone [from Rome]to Thessalonica….”
Demas had at one time been Paul’s assistant in the ministry (Philemon 24). Here was a man who along with Luke greeted the church at Colossae, and now has his affections elsewhere, willfully abandoning Paul. Apparently Demas decided to desert Paul when the going got tough. Likely Demas was ashamed to be associated with a prisoner on death-row, and perhaps even fearful for his own life. Paul’s life had been a shining example of “being dead to this world” and so he expresses great pain when he tells us that Demas’ actions pursued his affections of love for this world. It was to this world with negative connotations that Demas had attached his heart.
Being overly attached to places, people and possessions is the ever-present danger of all believers, and an effective way that Satan attempts to neutralize our witness. What do the Scriptures say about this ever-present danger?

Recall that C.S. Lewis once quipped that “those who are most effective as ambassadors for Christ in this world, are those who are least attached to it.” We saw this with Paul who considered “everything as loss because of the surpassing worth of knowing Christ Jesus my Lord. For His sake I have suffered the loss of all things and count them as rubbish, in order that I may gain Christ.”

As believers we must continually ask ourselves, “Does my example as a Christian wean people away from love of the world, or does it increase their attachment to it?”

I for one am convicted by this question… and, inevitably, my friends, like it or not, we will be judged by the answer.