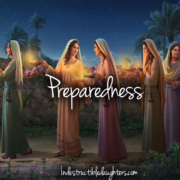 The Parable of the Ten Virgins (Matthew 25).

Here Jesus generously illustrates the urgency of preparedness for His coming:

“At that time the kingdom of heaven will be like ten virgins (the church) who took their lamps and went out to meet the bridegroom (Jesus). 2 Five of them were foolish and five were wise.3 The foolish ones took their lamps but did not take any oil (the Holy Spirit) with them. 4 The wise ones, however, took flasks of oil along with their lamps. 5 The bridegroom was delayed in coming, and they all became drowsy and fell asleep.

6 “At midnight the cry rang out: ‘Here’s the bridegroom! Come out to meet him!’

7 “Then all the virgins woke up and trimmed their lamps.8 The foolish ones said to the wise, ‘Give us some of your oil; our lamps are going out.’

9 “‘No,’ they replied, ‘there may not be enough for both us and you. Instead, go to those who sell oil and buy some for yourselves.’

10 “But while they were on their way to buy the oil, the bridegroom arrived. The virgins who were ready went in with him to the wedding banquet. And the door was shut.

13 “Therefore keep watch, because you do not know the day or the hour.

The ten virgins of the parable were entrusted with a serious responsibility. They were to await the coming of the bridegroom (Jesus), expected at any moment, and provide light for the path of His coming. Five of the virgins took their assignment seriously. They did everything possible to be on guard: The wise took flasks of oil with their lamps. The other five virgins were foolish: They took no oil with them. They neglected the only means by which their lamps could do any good. What good is a lamp, which has no oil to burn to make light? They were supposed to shine with light.

When we first receive Christ we are so excited and quick to shine His light, the light of His Spirit, to others. Yet, over time lack of intimacy with His Spirit causes some to despair in the hard times, becoming disillusioned and walking away. Or perhaps they choose to hold fast to their title, while living lives according to their own purposes. In the parable, these foolish virgins must have liked their position as lamp carriers. After all, I would think that they could have left, if they didn’t like their job. Yet they remained as ill-prepared lamp carriers. Was this about pride and position? Were they thinking, “I have a lamp. I have a lamp. I have a shiny lamp” — with no attention to its emptiness? Their foolishness was to think that mere religious ritual or form was sufficient. Their foolishness was to think that power for light can be borrowed or traded. For example today, one might say, “ Yes, I’m a Christian. No, I don’t study the Bible. I don’t have intimacy with Jesus through the Holy Spirit, that’s too strange, I don’t, I don’t, I don’t…” But the light only shines through the fire of the Spirit, through intimacy with the Holy Spirit. It can’t be bought or borrowed or ignited by religious ritual or form.

Matthew 25:5, “As the bridegroom was delayed, they all became drowsy and slept.” “The Lord is not slow to fulfill his promise as some count slowness, but is patient toward you, not wishing that any should perish, but that all should come to repentance” (2 Peter 3:8–9). Jesus told us in advance there would be a delay. During the delay all of the virgins slept, those prepared and not prepared. The wise virgins could sleep in peace because they were ready for the bridegroom. Notice two things: Jesus tells us ahead of time there is going to be a delay between the comings. He came once declaring the kingdom of God. And He’s coming again!

The second thing to notice is this: All ten slept, not just the foolish. The wise virgins slept, because they were prepared. Sleep signifies normal, ordinary life of doing what you are called to do and sleeping when you get tired.

What do you want to be found doing when Jesus comes? Staring into the sky, saying, “Deliver me”? Or seated at a bedside, praying for a sick person?

Are we ready? Are our children and grandchildren ready? Or have we fallen asleep, like the foolish ones, snatched away by worldly distractions and in effect, carrying an empty lamp? “I go to church. I carry a Bible. I pray before meals. I try to keep the Ten Commandments.” While inside… nothing of intimacy by the Holy Spirit is aflame, not love for the bridegroom, nor love for our fellow man. May we be as the wise ones, in preparedness, continuously being filled with the oil of His Spirit, steeped in faith, hope, love, and charity, and eagerly awaiting that midnight cry, “‘Here is the bridegroom! Come out to meet him.’”(Matthew 25:6) And the “Lord himself will descend from heaven with a cry of command, with the voice of an archangel, and with the sound of the trumpet of God.” (1 Thessalonians 4:16)

And then that wondrous moment, “He is here. Go meet him. Let your lamps burn brightly with  joy, faith, hope, love, expectancy, praise, wonder, and marvel.”